Be it known to you that in addition to the months of Sha’ban and Ramadan, the month of Rajabenjoys a great honor, as cited in many narrations that have also conveyed the merits of this month. Furthermore, the Holy Prophet (s.a.w.a.) is reported as saying, “Verily, Rajab is the Great Month of Allah. No other month can be as sacredand virtuous as this month. To fight against the polytheists during this month is forbidden. Most certainly, Rajab is the month of Allah, Sha’ban is my month, and Ramadan is the month of my people. Therefore, if one observes fasting on one day of this month, he will bindingly win the Grand Pleasure of Almighty Allah, will be taken away from His ire, and the gates of Hellfire will be closed in his face.”

Imam Musa ibn Ja’far al-Kazim (a.s.) is also reported to have said, “If one observes fasting on one day in Rajab, Hellfire will go away from him a distance of one year walking. One who fasts three days will bindingly win Paradise.”

The Imam (a.s.) is also reported as saying, “Rajab is (the name of) a river in Paradise that is whiter than milk and sweeter than honey. Hence, if one fasts even a single day in Rajab, Almighty Allah will allow him to drink from that river.”

Imam Ja’far al-Sadiq(a.s.) has reported the Holy Prophet (s.a.w.a.) as saying: Rajab is the month of imploring for forgiveness for my people; so, you should implore forgiveness repeatedly in this month much more than you do in other months, for Almighty Allah is forgiving and merciful. This month is described as the advantageous month, because mercy is poured on my people during it so heavily. You should thus repeat very much the following imploration prayer:

In a considerable form of narration, Ibn Baabwayh has quoted Salim as saying: I once visited Imam al-Sadiq(a.s.) in the last days of Rabaj. When his eyes turned towards me, he asked, “Have you fasted on any day in this month, Salim?”

“You have missed great reward,” said the Imam (a.s.). “Such a great reward that none can ever grant except Almighty Allah. Verily, this month has been given precedence to the other months by Almighty Allah Who has also given its sanctity a great consideration and will have certainly honored those who observe fasting during it.”

I then said, “O son of Allah’s Messenger, what if I fast on the rest days of Rajab, will I then be awarded anything of the rewards dedicated to those fasting in it?”

The recommended devotional acts of Rajab are divided into two parts: general and particular. The general acts are those advisedly said or done each day in the month without distinction. 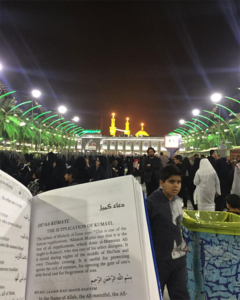